In June 1982, BC was the site for the first Vipassana meditation course outside of India to be led by Assistant Teachers of S.N. Goenka. After the first course in 1982, courses were held regularly at rented sites, mainly church camps at White Rock and Shawnigan Lake in 2012.

1983– we began holding annual off-center ten-day courses on Vancouver Island, and continued to offer a ten-day course per year at Camp Pringle and Camp Spruston.
2002– the donation of $750,000 for the purchase of the land designated specifically for Vancouver Island. A number of properties were considered from 2002-2006 including a potential rezoning application in Metchosin.
2006– 137 acres of bare land in Lake Cowichan was purchased. Years of design work for a center followed as well as the creation of a website.
2009– the bridge was built, as was the small meditation hall. Day sittings began on the land.
2011-the road was improved, and the upper property cleared.
2012– Hydro was put in and the pumphouse was purchased
2014– the container was purchased , to facilitate the storage of materials for courses.
2014-2015-separate men’s and women’s three-day courses were held on our own land!
2016-purchase of the house, and involvement of many volunteers to finish the house, and organize water and septic.
2018-purchase of the nunnery in Duncan and preparation to sell the property in Lake Cowichan

Dhamma Modana Joy of Dhamma is the name given by Goenkaji for the Vancouver Island Vipassana Association.

The Vipassana Island Meditation Center, Dhamma Modana is one of more than 180 centers worldwide offering courses in Vipassana Meditation, taught by S.N.Goenka and his assistant teachers in the tradition of Sayagyi U Ba Khin.
Dhamma Modana is located in Duncan, British Columbia, approximately 50 kilometers north of Victoria on Vancouver Island. The center is situated in a rural area of small farms, bird and forest conservation areas. Vancouver Island, off Canada’s Pacific Coast, is known for its mild climate and thriving arts community.
Dhamma Modana was founded in 2006 by the the Vancouver Island Vipassana Association, which was formed by students in this meditation tradition to operate Dhamma Modana. The trust responsibilities continue to be shared by a rotating group of old students who volunteer their time, along with other volunteers and staff members, to operate the center. Dhamma Modana has been run solely on a donation basis since its founding 12 years ago. 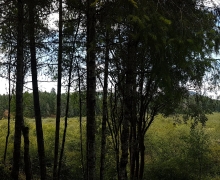 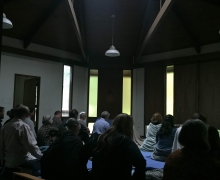 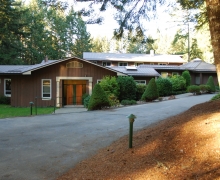